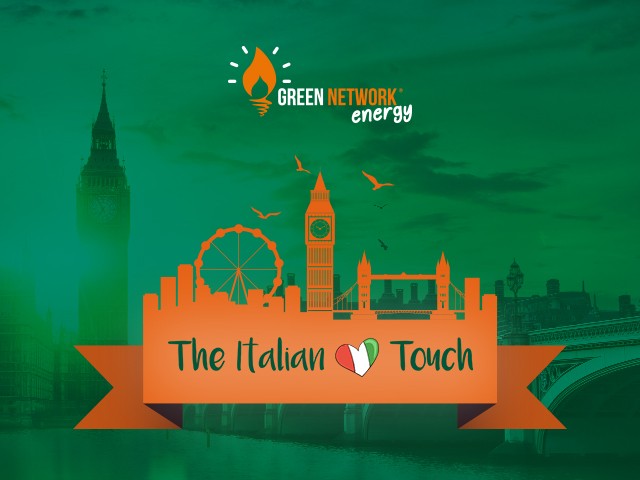 Green Network was founded in 2003, following the deregulation of the Italian electricity market. The Group is active mainly in the gas and power industry, where it operates as a wholesaler, trader and supplier of electricity as well as the generator of electricity from renewable sources.

Over a decade later, in Italy, Green Network is today acknowledged as a very important domestic player, the energy partner of industrial companies operating nation-­‐wide, an important benchmark for the SMEs, and is ranked among the first ten operators in the country. The company can pride itself on a grassroots network of agents and agencies throughout Italy. Starting from such a stepping stone, an expansion overseas was natural.

The UK, with a growing number of Italians calling it home, is a key part of the expansion. Bringing a touch of Italy to the market, Italians can now choose a supplier that speaks their language, with a bilingual website and call center offering customers support.

In what can be a confusing market, Green Network Energy is trying to keep things simple with energy prices fixed for a year. Customers will pay by Direct Debit, a fixed amount each month, based on the information they provide when registering.

One of the driving forces behind the success of Green Network Energy and at the forefront of expansion plans is Sabrina Corbo.

Executive Vice President of the Green Network Group, Sabrina founded the enterprise from scratch in 2003, pouring in a share capital of €10,000 along with her husband Piero Saulli, President and CEO of the company. Sabrina had previously worked in international law firms in Rome and London; Piero was a manager in Enel.

Nearly 15 years later, the Green Network Group, boasts annual revenues of circa €1.5 billion. The company employs over 200 people directly, 400 more indirectly and with a median age of just 30, blends experience with youth to create a vibrant working environment.

After launching a trading operation in London in 2012, Sabrina returned to the capital, with her family, in September 2014, with her family. Aiming to recreate the success of the business in Italy, Sabrina’s decision to return was also driven by her belief that it is important to lead when you expect others to follow.

It may safely be said that Sabrina has been faithful to Jane Austen’s bond between sense and sensibility in her professional career. Her attention towards the families of Green Network’s staff is nothing off-­‐handed, it stems from some tangible previous, personal experiences.

At the onset of Green Network, finding it impossible to get a baby-­‐sitter, Sabrina decided to set up her own child care service, Le Fate Turchine. Later on, she realised what it meant to reconcile work and family, particularly for women. So the service broadened into a nursery and a kindergarten, free for all the company’s employees.

Le Fate Turchine nursery and kindergarten today has over 120 children. It is open to the public and offers a three-­‐language syllabus: Italian, English, French.

Family values, efficiency, the determination to smash the glass ceiling, advancement of the young, female professional figure; green energy which is both affordable and sustainable and a leadership able to instill continuity and commitment in the team: these are the principles underlying Green Network, the energy solution based on sound ethics.

Sabrina Corbo sums up in very clear and simple words how a husband-­‐wife inspiration going back to over a decade ago has become a full-­‐scale business today: “After all, we supply energy, intangible and essential, just like dreams”.

A good thing for Italian expats in the United Kingdom. It is now possible to have this energy right in their homes.

*Representative of monthly costs based on a standard meter, dual-­‐fuel, medium user (3100 kWhs elec. and 12500 kWhs gas) paying in advance by direct debit, inclusive of any discounts.