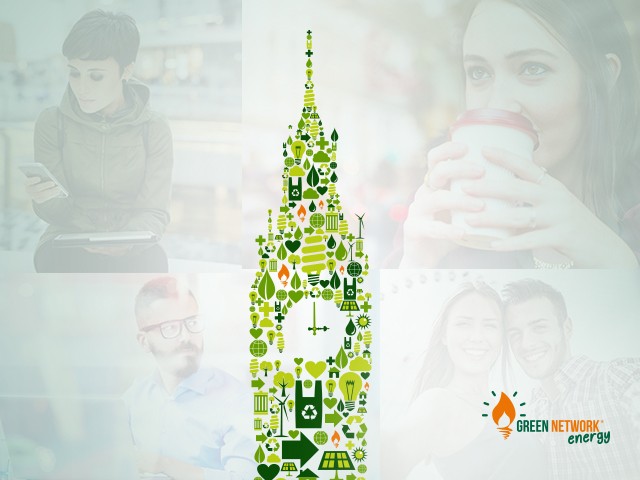 Italian energy lands in the United Kingdom, with a market approach combining affordability, eco-friendliness and customer focus, flavoured with Italian creativity and professionalism. Not an easy feat, in a highly competitive market such as the UK (the energy sector was deregulated twenty years ago), where consumers can now choose their gas and power supplier from amongst dozens of operators.

Green Network Energy takes on this challenge. The gas and power company founded in Rome, after its Italian success – with over 150,000 customers, GNE is the fifth domestic operator – has decided to step into the UK market, starting as a trader and then as an energy supplier. The company has been supplying households since October 2016; in May, it will be active on the SME market and, by the end of the year, it will also reach Industrial customers.

From the Eternal City to… the City, Green Network Energy (GNE) is the first Italian independent energy company in the UK. It speaks and thinks in Italian – as second nature.

The Italian Touch is the slogan devised by Green Network Energy in the UK: deals designed to add an extra touch, a competitive advantage, with a special focus on the Italians living in the United Kingdom – as many as 600,000. Hence, the attractive rates, a clear and exhaustive website in English and Italian, a simple and immediate online procedure for switching from the old to the new supplier, and a bilingual call-centre, whose operators are always ready to provide information and assistance in both English and Italian.

In addition to the Standard rate, Green Network Energy proposes the Green variant, 100% from renewable sources. The environment, the silent backbone of the energy chain, has always been at the core of GNE’s corporate policy. The strategy is based on renewable sources already available on the market and the creation of cutting-edge plants, in line with the concept of the Green Economy.

The enthusiastic advocate of this project and leader of Green Network Energy in the UK is Sabrina Corbo (Green Network Group’s Executive Vice President), who founded the company in 2003 along with her husband Piero Saulli. Corbo moved to London and, endowed with a far-sighted vision, built the company with disenchantment. In the male-dominated energy industry, her story is an exception, and testifies to her determination and courage.

A mother of three, Sabrina has always tried to reconcile work and family, pursuing her objectives without sacrificing her loved ones. The result is a new corporate vision, on a human scale, more focused on the work team, which puts human relations first (“Energy in People”, reads the Group’s slogan). This focus on people, the environment and the community is also evidenced by the charity activities that Green Energy Network supports regularly. A case in point is the fundraising programme recently promoted by the Italian Embassy in London for the earthquake in Central Italy. On that occasion, Green Network donated £ 10 for each contract signed.

The roman actor Gigi Proietti accompanied Green Network Energy to the UK, as a celebrity spokesperson, on an “official visit” to the City. He was acclaimed at the headquarters of Lupi di Londra (The Wolves of London), where the passion for AS Roma crosses borders. And then sports bars, traditional restaurants, city walks: these hilarious sketches can be enjoyed on Green Network’s YouTube channel.

Green Network Energy’s strategy is proving successful: operations started at the end of 2016 and over 15,000 customers have already placed their trust in the new company. This figure is expected to grow exponentially with the launch of a national advertising campaign on TV and newspapers and the introduction of offers targeted to small and medium-sized enterprises. Yet another demonstration that, despite the Brexit vote, the UK has still room for Italian talent, initiative and creativity.